Natural ozone forms during storms in the same manner as in the stratosphere: air contains oxygen (O2) which is broken down into atoms by an electrical discharge and the individual atoms form another air component, i.e. ozone (O3).

A similar principle is used to create ozone from the ambient air in HealOzone (3 O2 => 2 O3).

Ozone has biochemical properties. Its sterilisation effect stems from its unstable atomic bond and the consequent good bonding with other elements. Ozone is one of the most powerful and most effective oxidising agents. Specific concentrations of ozone attack selected bacteria, viruses and mould fungi over a set period of time. Their cell wall consisting of unsaturated fatty acids serves as an aid in the bonding process. Oxidation destroys the cell membrane and opens to cell to a double carbon bond.

Healthy cells are resistant to the effects of ozone in prescribed concentrations and their cell membrane is stabilised by oxidation. Ozone is helpful in preventing the resistance of certain bacteria, viruses, and mould fungi.

Ozone may be used for the following indications:

Open caries lesions in combination with other conservation work.

This significantly simplifies the treatment process and increases the success rate due to the higher disinfection effect of ozone. 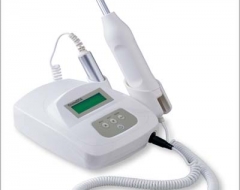 Dental Centre - Lebeda With the aid of the cutting-edge plasma lamp technology manufactured in the United States. The procedure takes on 45 minutes...